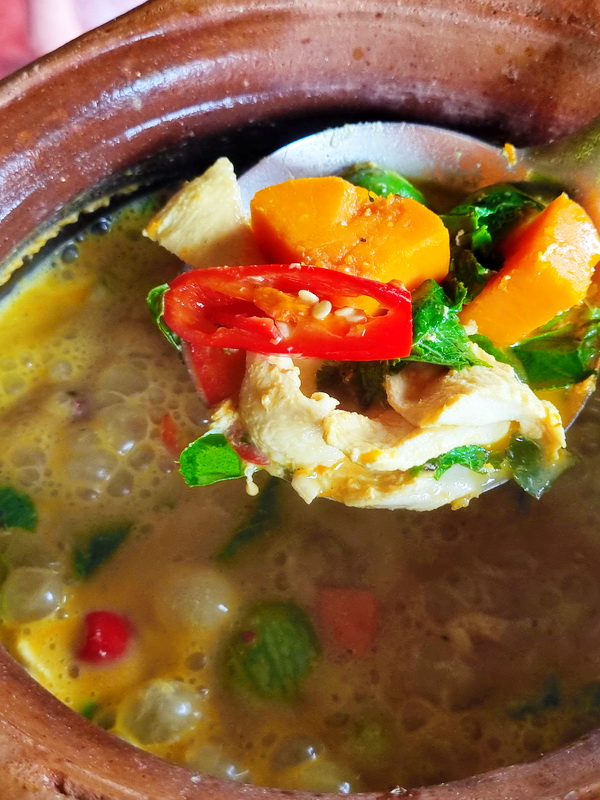 • Stop off to enjoy the scenery at the beautiful Khao Sok view point.

• Arrive at a small locally owned Khao sok jungle camp and farmstay and join the family in foraging for fresh organic ingredients.

• Cruise gently down the Sok River on bamboo rafts to an ancient cave temple.

I had a great time great services and really nice people, thanks for the great experience😄

The Khao Sok National Park is one of the most searched for destinations in Thailand. The spectacular scenery, lush rainforest and gushing rivers attract visitors from all over the world.

Now you can experience Khao Sok with the people who live there. Our Khao Sok adventure, gives you the chance to spend a day with a local family.

We start by picking you up from your hotel in Khao Sok, it is a brief drive up towards the Khao Sok national park. Soon we arrive at the Khao Sok view point, where we stop to admire the breathtaking scenery.

After admiring the view for a while, we jump back in the minibus to visit Mr Yoo and his family in their Khao Sok jungle camp. Mr Yoo was born and raised in the Khao Sok jungle, and loves to share his local knowledge. He will take you on a short walk around his home and show you how to collect and harvest a range of seasonal native fruits, herbs and vegetables. 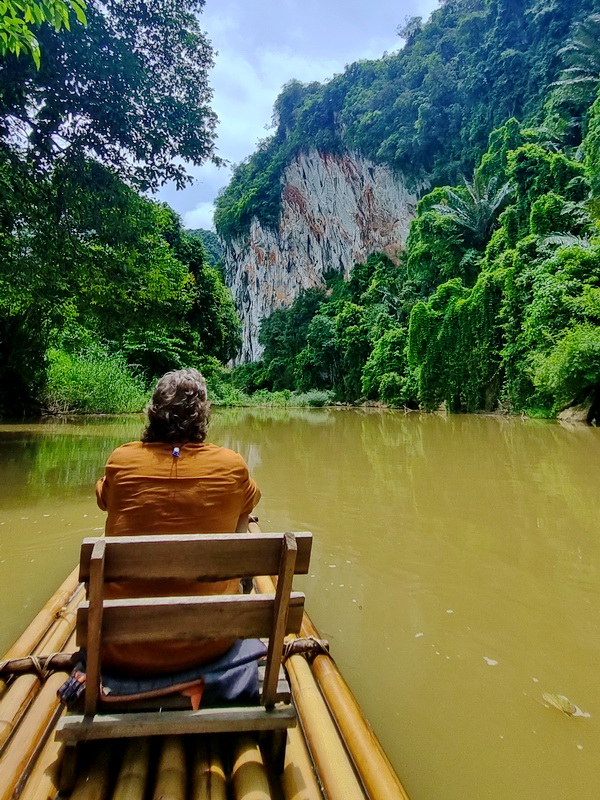 Once you have collected all your ingredients for your meal, it is time to learn how to prepare and cook them. Mr Yoo and his family are on hand to help you prepare a delicious traditional Thai lunch. Next comes the best bit, eating it!

After lunch it is time to say goodbye to the family and head over to the river. What better way to relax after a hearty lunch than gently drifting down the river on a handmade bamboo raft?

As you glide down the Sok river, the scenery will take your breath away. Each bend in the river reveals another amazing view as you slowly cruise down the river, surrounded by giant limestone mountains.

On some days you can see eagles and other birds nesting on the cliffs. Sometimes you can even see monkeys, or snakes in the trees as you glide past.

Bamboo rafts have been used in this area for centuries. The cruise is finished off with a quick cup of bamboo coffee, before a chance to explore one of the many Khao Sok Cave temples.

Located about an hour’s drive north of Khao Lak, the Khao Sok National Park is Thailand’s largest area of virgin rainforest. The Khao Sok Jungle is often said to be older and more diverse than the Amazon rainforest. It is estimated that over 5% of all the animal species in the world can be found in the Khao Sok national park. Including nearly 400 species of bird, over 90 species of reptile and almost 50 species of mammal.

The national park covers an area of almost 740 square kilometers in total. Since the completion of the enormous 94-meter-high Ratchaprapha Hydro- Electric Dam in the early 1980’s, much of the park is now underwater. The Khao Sok lake covers an area of approximately 165 square kilometers. It is also now possible to visit the Khao Sok lake, and even stay ever night in the Khao Sok floating bungalows, Khao Sok floating resorts and raft houses.

Overnight stays on the lake, or overnight Khao Sok safari tours are on the ‘to do list’ for almost every backpacker in Thailand. Those who are lucky, can see all kinds of wildlife including sometimes wild elephants in the Khao Sok jungle. There are even reports of tigers.

One of the most famous plants in the Khao Sok jungle is the Rafflesia. These giant flowers usually only open their petals for one week per year. Mostly at some point between January and March. Rafflesia are the largest flowers in the world. They can grow up to 90cm across and weigh up to about 7kg. Another thing that makes these flowers special, is that they are not pollinated by insects such as bees or butterflies who seek sweet smelling nectar. They prefer to be pollinated by flies. To achieve this, Rafflesia flowers will give of a pungent odor similar to a dead animal or pile of rotting trash.

Is the food ok for everyone?

Of course. The food you cook on this tour can be tailored and adapted to suit you. If you like it spicy or not, you are in control.

If you are vegetarian, vegan have allergies or other dietary requirements just let us know. We will do our best to accommodate you.

How far is it to Khao Sok?

From the center of Khao Lak it takes about 1 hout 15 minutes to get to Khao Sok.

YES! This trip can be made private and personal for you. Simply click the “Private Tour” option when making your booking, and we will get back to you with a quote. 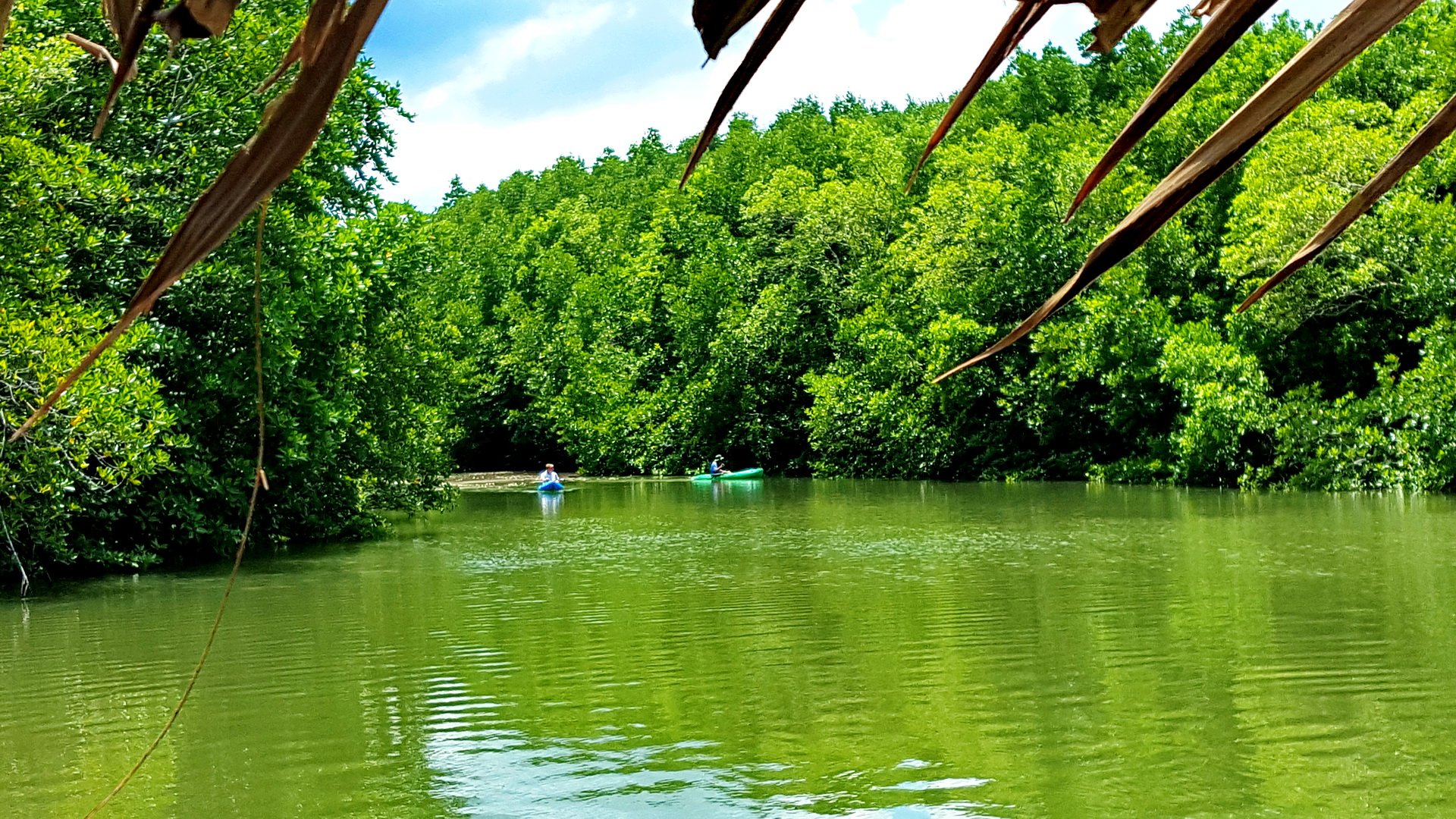 Discover the beauty of the Khao Lak mangroves. For the first time it is now possible to kayak the unexplored natural maze.

Explore the rainforest right on your doorstep! Khao Lak is surrounded by lush jungle. Try your hand at some local bushcraft skills.