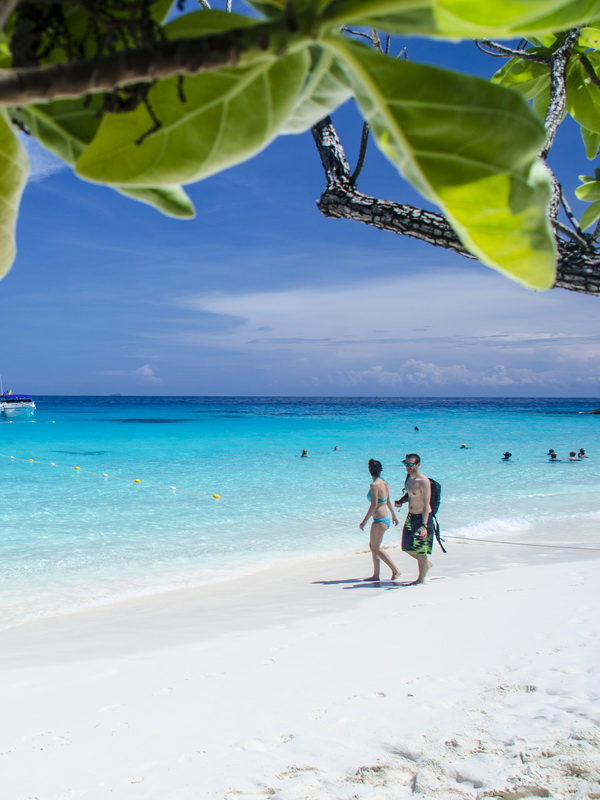 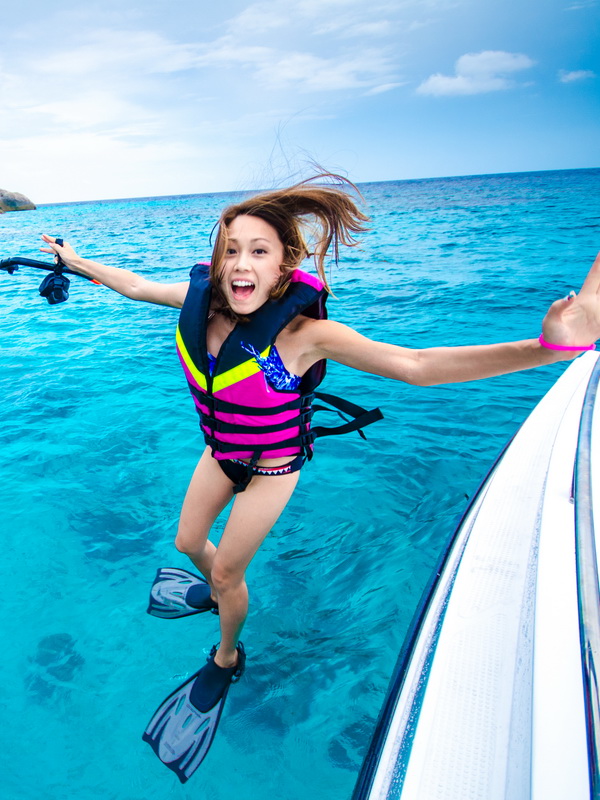 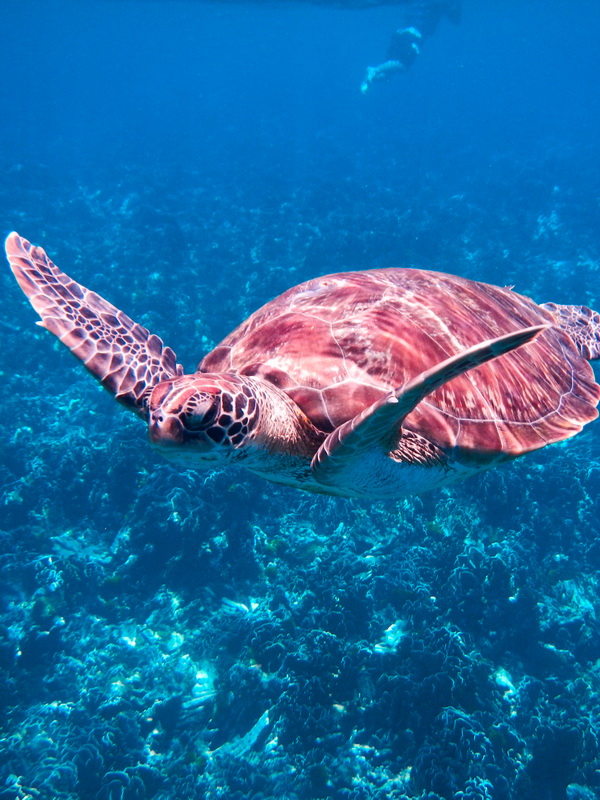 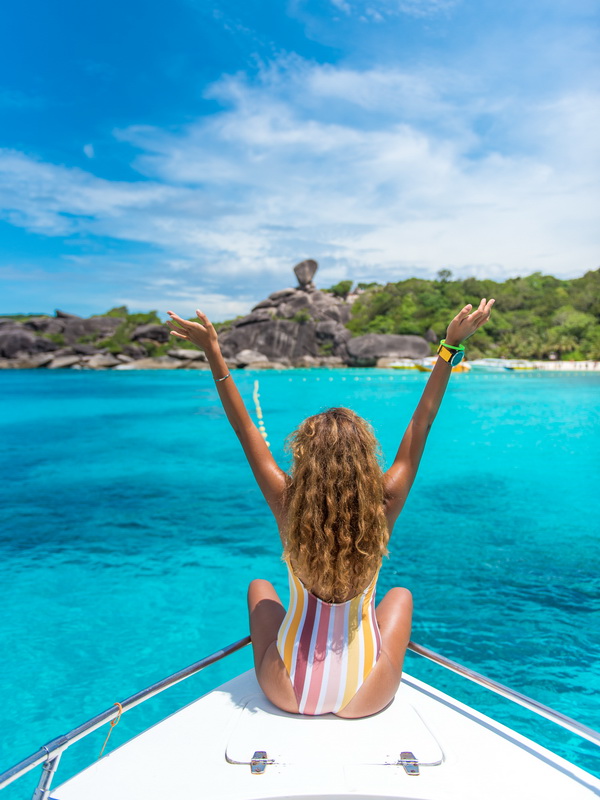 • Pick up from your hotel in Khao Lak and head to Wow Andaman Pier.

• Check-in and collect your snorkeling gear before departing for the Similan Islands by speedboat.

• Arrive at Koh Miang (Isl. 4) and chill on the beautiful white sand beach.

• Snorkel in the crystal clear water around Payu  (Isl. 7) and Ba Ngu (Isl.9) islands. The reefs surrounding these islands are home to many kinds of tropical fish, and are often visited by turtles.

• Return to the pier where the transfer is waiting to take you back to your hotel in Khao Lak.

* Pregnant women, people with back/neck trouble, heart problems or any other serious medical conditions are not permitted to join speedboat tours.

a wonderful experience with Discovery

My wife and I had a wonderful experience with Discovery. They really took care of us and went above and beyond to make sure we were having a great time…We will definitely check out another one of their tours if we are ever in the area.

A Thailand holiday is not complete without a day trip to the Similan Islands from Khao Lak. The Similan Islands Marine National Park is famous for beautiful coral reefs, white sandy beaches and crystal-clear water.

The day begins when you arrive at Wow Andaman Pier. Once you have checked-in there is plenty of time to choose your snorkeling gear and enjoy a light breakfast before you meet your guide for the day. Before the boat departs, your guide will give you a short introduction to the Similans and give you a bit more detail about the plan for the day.

Soon it is time to board the speedboat. An early start means that you stay one step ahead of all the crowds. From Khao Lak to the Similan Islands by speedboat takes about 1 hour and 20 minutes.

The first stop of the day is on the island of Koh Miang. This island is the headquarters of the Mu Koh Similan National Park and has 2 of the best beaches for swimming and relaxing.

The first snorkeling spot of the day is just a short boat ride from the beach. 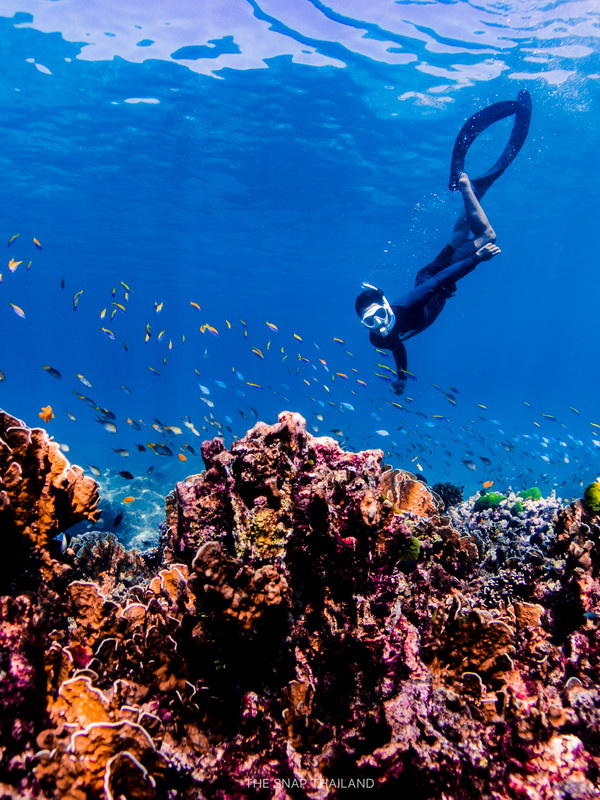 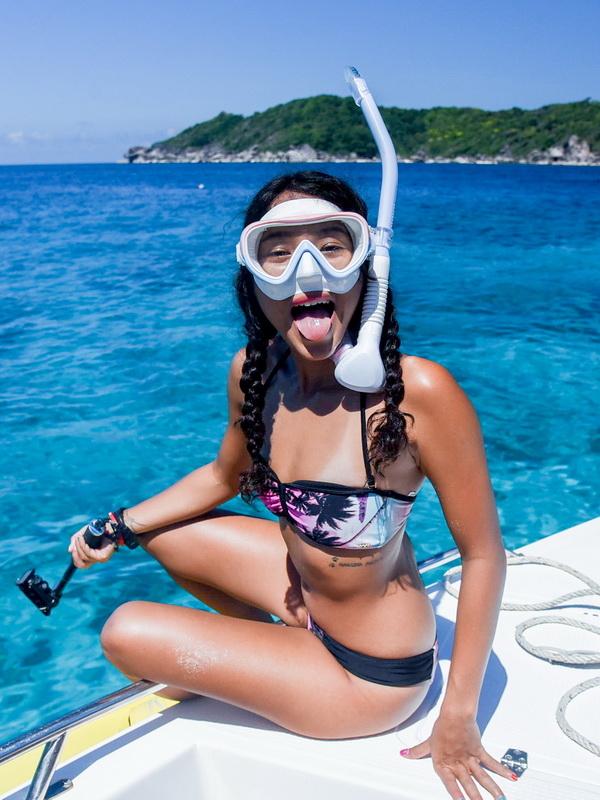 This is your chance to get up close and personal with a wide range of tropical marine life. Wild turtles and even the famous Nemo often make an appearance here. But make sure you save some energy! There is still another snorkeling stop to come.

Once everyone is back on the boat it is time to head for the second snorkel spot. Each bay in the Similan Islands has its own unique character and highlights. So, grab your mask and jump in!

The second beach stop of the day is at ‘Donald Duck Bay’ on Ko Simlan (Isl. 8). This is the biggest island on the Similan Islands map, and probably the most famous. Here the impressive granite rock formations line cascade down to the sea.

Lunch is served in the shade of the jungle, behind one of the most stunning beaches in Thailand. After lunch there is plenty of time to enjoy the beach or take a trek up to the ‘Sail Rock’ view point for a birds-eye view.

It is also possible to snorkel from the beach here for those who just can’t get enough.

Upon your return to the pier, your taxi will be waiting to take you back to your hotel in Khao Lak.

The Mu Koh Similan National Park is located about 65km (35 nautical miles) from Khao Lak. First established around 1982, the Similan Islands National Park covers and area of about 140km2 and include 11 different islands. To make navigation easier, the locals have numbered each island from South to North;

The word ‘Similan’ comes from the Yawi dialect meaning 9. This refers to the main group of 9 islands which were first included in the national park. Koh Bon and Koh Tachai were included when the park was expanded in 1998.

Currently, only 7 of the islands are open to the public. Islands 1-3 have been set aside as a conservation area and permanently closed. Koh Tachai was briefly opened to the public, but was closed again in 2016 due to over popularity.

The rest of the park is open each year from the 15th of October until the 15th of May. There is now a cap of 3,850 visitor per day, so it is essential to book in advance. Especially at peak times.

The islands consist mainly of ancient granite rocks that were forced up by volcanic activity millions of years ago. Underwater the heavy white sand keeps the water crystal clear and perfect for snorkeling.

Some of South-East Asia’s most impressive marine life can be found around the Similan Islands. The quieter beaches on the islands make perfect nesting grounds, so snorkelers are often visited by both green turtles and hawksbill turtles. At certain times of the year it is also possible to see manta rays and whale sharks drifting past the islands. However, these gentle giants are mostly spotted when scuba diving.

When are the Similan Islands Open?

The Similan Islands are open ever year between the 15th of October and 15th of May. The best time to visit is usually between January and April. At this time of year the weather is more predictable, however the islands can get busy.

Do you need to book in advance to visit Similan Islands?

The short answer is yes. There is now a cap on how many people can visit the park each day. In order to purchase a ticket, the boat operator will need to register your details with the national park office in advance.

Is Similan islands worth visiting?

It is no secret the Similan Islands can get crowded. That said, the islands are stunningly beautiful. The power white beaches are perfect for swimming and the water clarity has to be seen to be believed!

Ever since 2018 a limit has been set on the number of people who can visit each day. Although the islands are still far from deserted, this had made an improvment during the busy periods.

The Similan Islands are defiantly worth a visit!

Can you stay on Similan Island?

There are no hotels on the Similan Islands.

Prior to 2018, it was possible to stay in a tent or national park bungalow on 2 of the islands. Currently however this is no longer allowed due to the negative enviromental impacts it was having.

YES! This trip can be made private and personal for you. let us know when making your booking, and we will get back to you with a quote.

However be warned, a private speedboat trip is costly. The average speedboat uses around 500 liters of fuel on a day trip to Similan, so the average price usually works out to about 50,000-60,000 Baht.

It is improtant to say here that once a booking is confirmed, national park entrance fees are non-refundable.

*This trip is provided by one of our partners so certain conditions may differ. 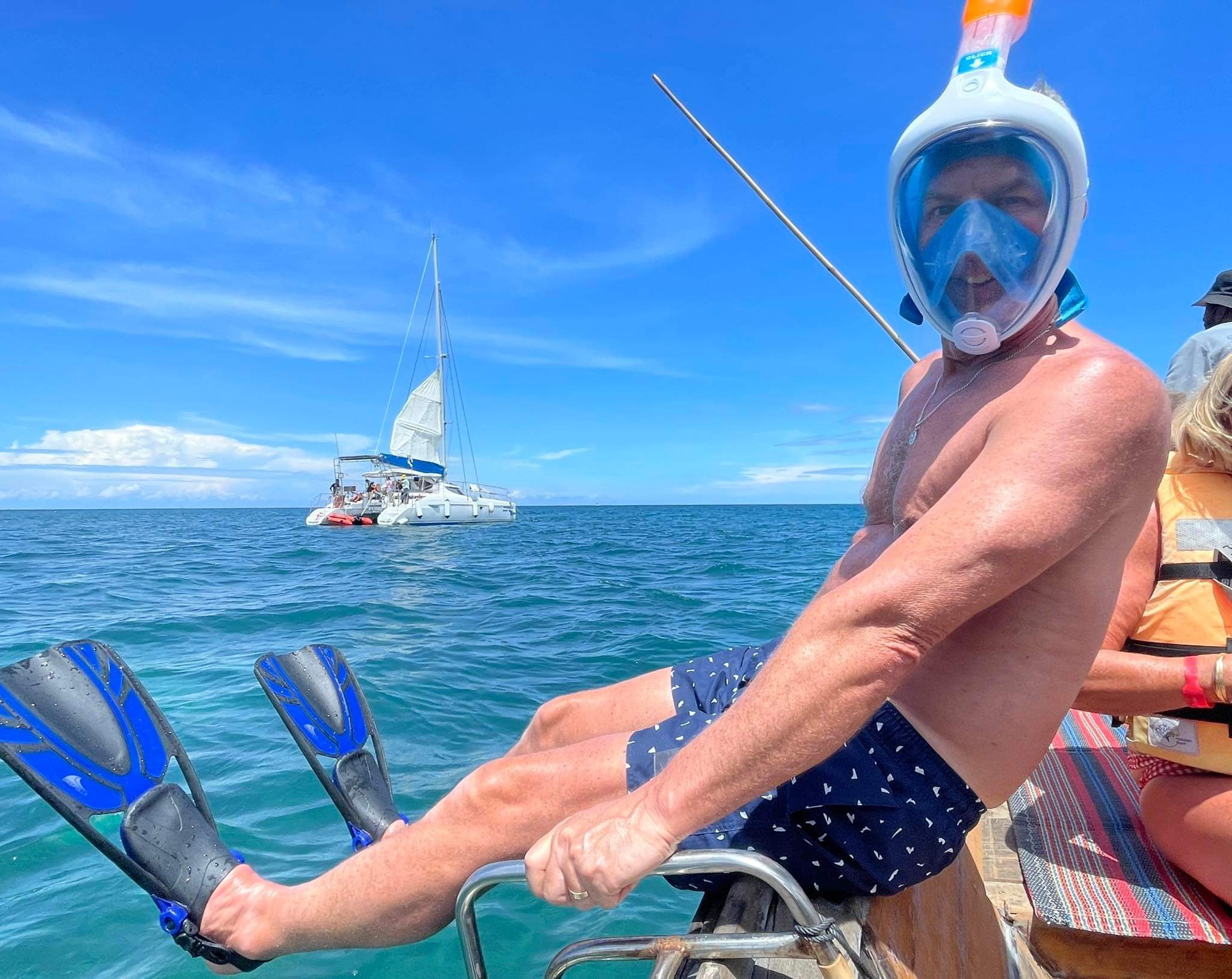 Explore the underwater world close to Khao Lak. No big groups and no long travelling times make this the perfect day tour perfect for everyone! 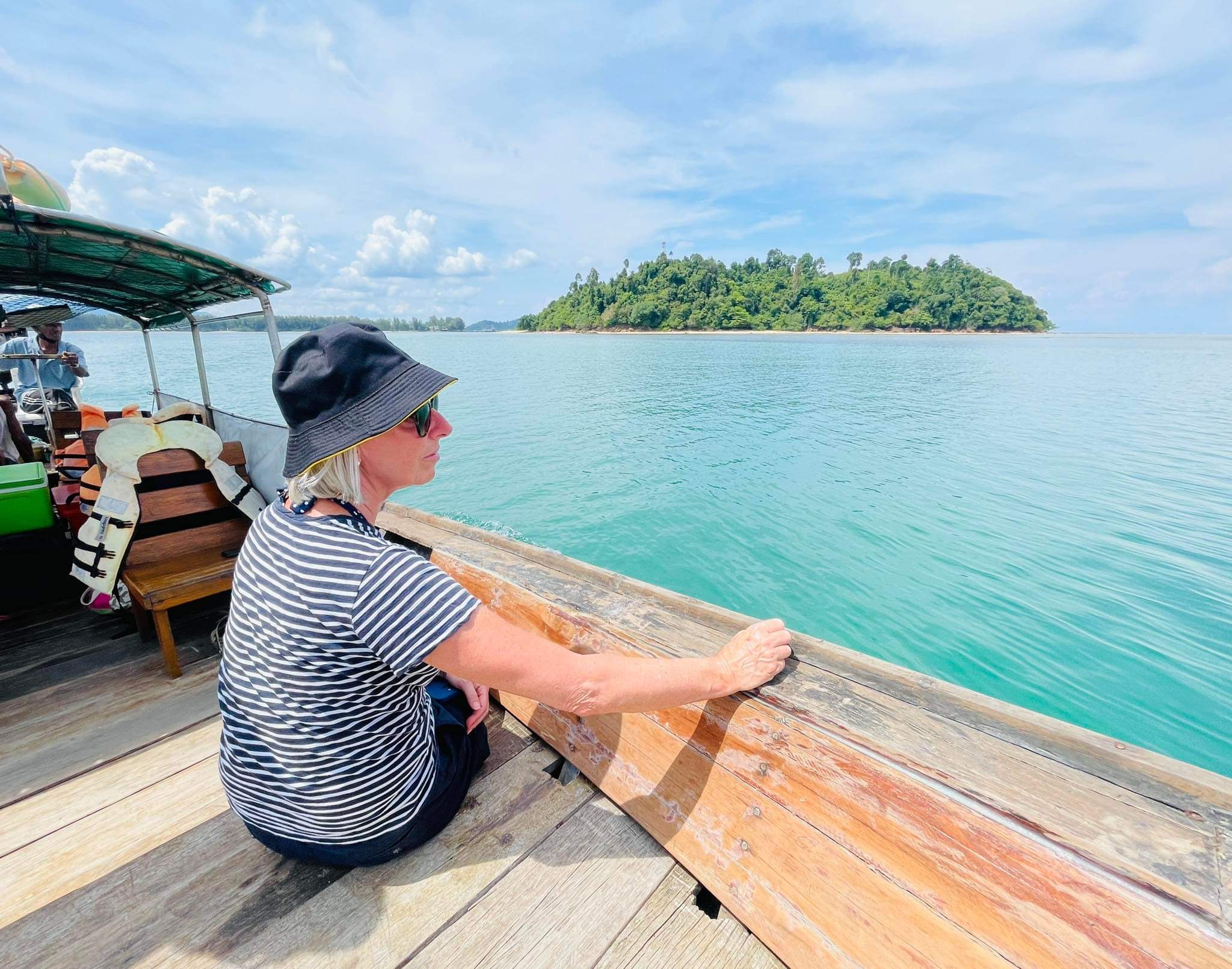 Slow down and relax with our beautiful shoreline cruise. Explore the coast of Khao Lak at your own pace with our expert crew.