• Pick up from your Khao Lak hotel for a short drive to Baan Nam Khem Pier.

• Check in at the pier and choose your equipment before boarding a joined speedboat to your transfer to the Surin Islands.

• Once you arrive in the Surin Islands, your private longtail boat will be waiting to meet you.

• Spend the day exploring the Moken village, the best reefs and hidden beaches, away from the crowds and big groups. You are in full control and can plan the day the way you want, with help from your guide.

• Meet up with the speedboat for your return to the mainland.

* Pregnant women, people with back/neck trouble, heart problems or any other serious medical conditions are not permitted to join speedboat tours.

The most beautiful of our excursions during the stay. The relaxation is total, with the added bonus of discovery
of the MOKEN people.

The Surin Islands National Park is often noted to be one of the world’s top destinations for snorkeling and diving. But of course, with great natural beauty comes great appeal to large groups of tourists.

For the first time you can now experience the beauty of the Surin Islands without the crowds and large groups. And without the expense of a private speedboat charter.

On the morning of your trip, we will pick you up with a private minibus. There is no hanging around or stopping at multiple hotels here! From Khao Lak it is just a short drive to the pier. Once you arrive at the pier there Is plenty of time to choose your equipment and have a cup of coffee before the speedboat departs.

The speedboat ferry takes about 1 hour 40 minutes from the pier to the Mu Ko Surin National Park. Upon arrival in the Surin Islands, your private longtail boat will be waiting to greet you. From here you leave the large groups behind and continue at your own pace. With your private longtail boat and a bit of help from our guide, you can visit places the big speedboats can’t go. Cruise off around the back of the islands and you will find some of Thailand’s most beautiful coral reefs, without the crowds!

You are in full control of the day. You can plan your snorkel stops ang beach stops with your guide. The guide and Monken boat captain will help make recommendations based on the weather and tides.

When you start to get hungry, it is time to return to Surin Nua and the national park restaurant. On the island here you can often see macaques and flying lemurs jumping through the trees. There is plenty of time to explore the islands and the beautiful white sandy beaches.

No visit to the Surin Islands is complete without a visit to the Moken sea gypsy village. The village is situated in Bon Bay on Ko Surin Tai. The Moken sea nomads have been living a semi-nomadic life around the Andaman Sea for thousands of years. Their village on the Surin Islands is where they shelter from the monsoons and repair their boats. Ever since the 2004 tsunami, many families have registered to live a semi-traditional life here on the beach.

After an amazing day in the Surin Islands it is once again time to join the speedboat ferry back to the mainland.

The Mu Ko Suin National Park is located on the Thai-Burmese boarded slightly North from Khao Lak, about 60Km from the mainland. The archipelago is made up of 2 main islands (Ko Surin Neua and Ko Suriin Tai), with 3 smaller satellite islands. The park includes and area of about 141 square kilometers. Approximately 80% of the park’s area is underwater. One of the most famous sites in the Surin Islands national park is Richelieu Rock, about 10 kilometers southwest of the main group of islands. This remote rock is often referred to as being one of the world’s top dive sites, and is regularly visited by large marine life such as manta rays and whale sharks.

The Surin Islands are open to visitor every year from the 15th of October until the 15th of April.

Surin Island Snorkeling tours from Khao Lak have become a must-do day trip for visitors. The shallow reefs are regularly reported to be some of the best snorkeling reefs in the world.

The Surin Islands are also home to a community of ethnic sea gypsies known as the Moken. The Moken people are descended from tribes of sea nomads that have lived in the Andaman Sea for thousands of years. As sea nomads, the Moken would traditionally have spent most of their lives at sea. Living on traditional “kabang” house boats, and moving from place to place depending on the weather and tides. During the monsoon seasons, the various families would come together to build temporary villages in sheltered bays.

Moken knowledge of the sea and survival skills has been passed down by word of mouth through the generations. The Moken culture has a strong basis on community and sharing. They have no written language, and there are no words in their tribal language for individual possessions or worry.

They have a deep knowledge and understanding of their natural surroundings. The Moken are hunter-gathers and strongly believe that natural resources can never be privately owned.

Today, the traditional Moken lifestyle is under threat. National boarders have been drawn through the middle of their traditional territories. Although most of the Moken living in the Surin Islands have now been give Thai citizenship, many of their kin groups around the nearby Burmese islands remain stateless. The natural resources and area of land that are key to their survival are being sold off, privatized or protected, further limiting their ability to live traditionally.

It is not un-common for Moken children to be able to swim before they can walk. Scientists have also discovered that the Moken people have developed other unique traits that enable them to see clearly underwater and dive underwater for prolonged periods.

Is this trip private?

YES! From the minute we arrive in the Surin Islands, the trip becomes private.

Do you need to book in advance to visit Suirn Islands?

The short answer is yes. Although there is not yet a strict limit and regestration process like in the Similan Islands, there is still only limited spaces available.

When are the Surin Islands Open?

The Surin Islands are open ever year between the 15th of October and 15th of May. The best time to visit is usually between January and April. At this time of year the weather is more predictable, however the islands can get busy.

Is Surin islands worth visiting?

YES! when in Khao Lak, a Surin Islands day trip is a must!

The Surin Islands are often noted to have some of the best snorkel and dive reefs in the world.

Can you stay on Surin Island?

Yes, thre is a Surin Islands camping site managed by the national park. There is also bunglaows available if you are looking for more comfortable accommodation.

Is this trip expensive?

Ok, walking around town you will undoubtedly see Surin Island snorkeling tours for all kinds of different prices. Chances are this will be one of the most “expensive”. BUT.. thereis a very good reaon for this.

Firstly, this is the only trip without a large group. Most Surin Island snorkeling tours are operated using a speedboat. Speedboats are expensive to run so as a general rule the cheaper the price, the more people are sharing the costs.

Once we arrive in the Surin Islands, we leave the speedboat behind and enjoy the day at our own pace with a private longtail boat. THIS IS YOUR TRIP, NOT THE GROUP’S TRIP.

It is improtant to say here that once a booking is confirmed, national park entrance fees are non-refundable.

*This trip is provided by one of our partners so certain conditions may differ.

Become one of the tribe and experience the life of a Moken sea nomad in the beautiful Surin Islands with this exclusive 3 day adventure. 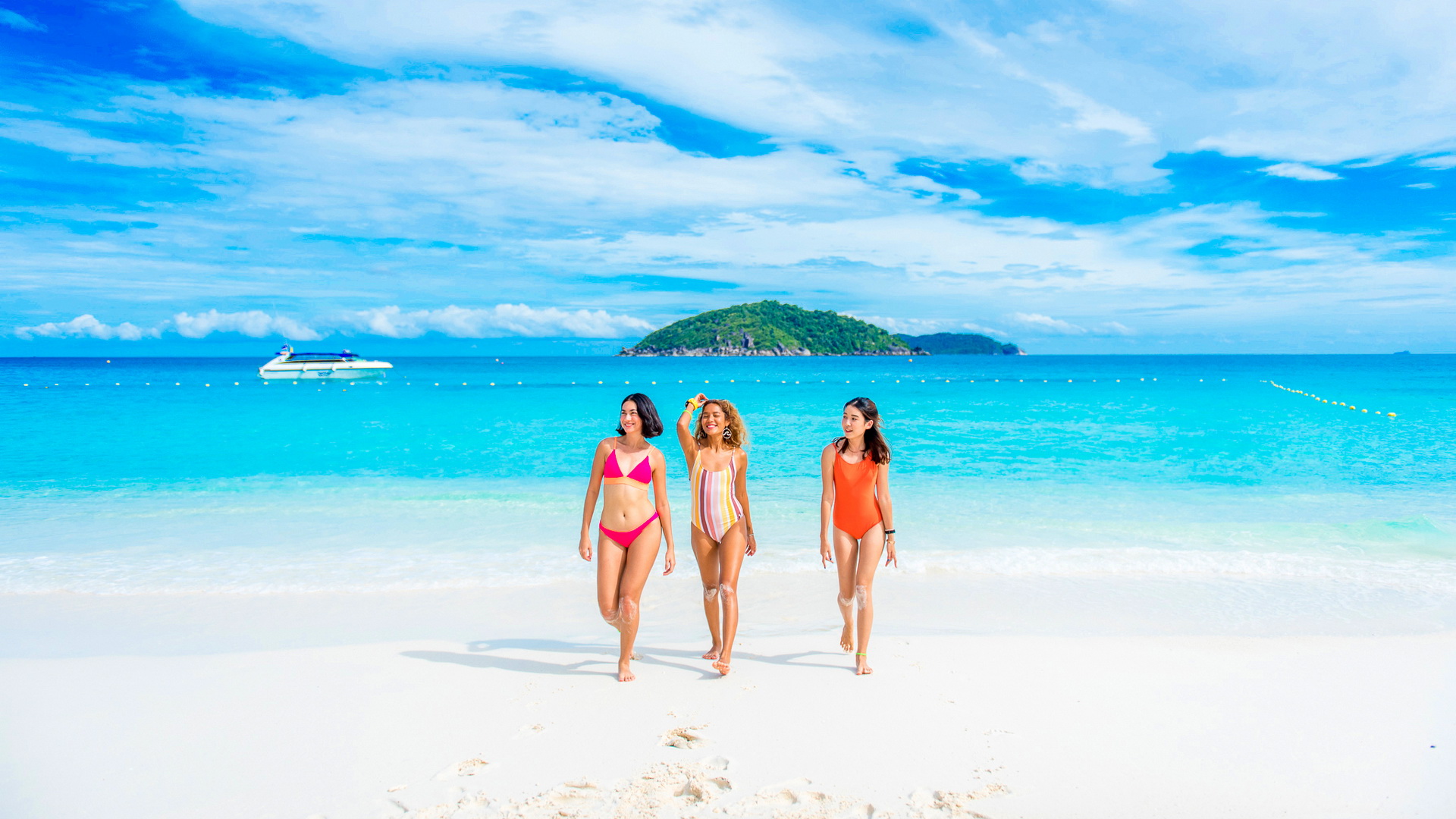 Discover the beauty of the stunning Similan Islands. the Siilan Islands are one of the most famous islands hopping destingations in Thailand.